Stepping on the land of Asia was an unforgettable experience. None of us did it before, we stayed only in Europe. I said goodbye to Europe while I was sitting on the ferry, as I knew, I won’t see this land one entire month long. The ferry took about 20 minutes to reach the Asian side. When we arrived, I thought the real adventure just begins. It was a calvary  to exit the city. We cycled 90 kilometers without any serious rests. Yeah, the Asian side was so unpleasant. In the evening our impression was, that we arrived at the heaven from hell. There was a wonderful lake nearby, which attracted me so much. I wanted to jump in it. Misi supported the idea, so we decided to turn the bikes in the direction of the beach. We fell in love with the place so asked the local people who had barbecue there if we can stay there for a night. We felt it would be a pleasure to camp or bivouac there. It was such a wonderful beach. At sunset we picked up our swimming shorts and splashed in the water. As we leaved the coast and headed the middle of the lake, we saw a real wonder: hundreds of swallows forked around us. Sometimes they flew just a few centimeters above our head. It was such an unbelievable natural beauty. 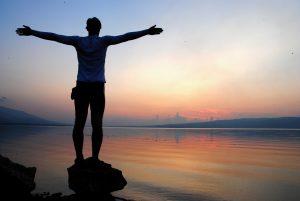 Well despite of it we didn’t spend that much time in the lake, as we were quite hungry after the 150 kms that day. As we turned out to the land, the people nearby somehow felt what we are about to do: the boy from the barbecuing family came to us and presented two portions of kebab for us.

– hey man, we really don’t need this, we’ve got our own food.

– no, this is Ramadan, we have to share everything with people, especially with travelers.

This is it, so we ate the delicious kebab, while we had a good conversation. He told us, if we’re in trouble, we should call him so he gave us his number, and also his friend’s number as he could speak English better. 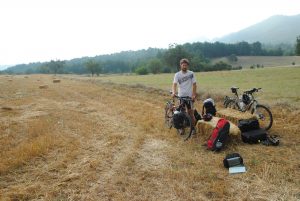 For a short period we didn’t feel a significant difference between Asia and Europe, but as we passed a 1200 m high mountain pass, the landscape changed dramatically. The high pine trees were changed by poplars and then bushes. Then all the trees disappeared, there was only the great steppe. 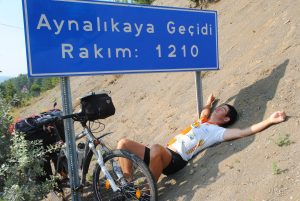 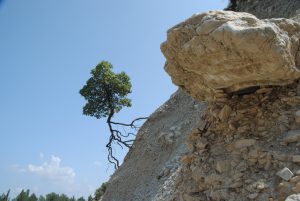 Then we turned southeast and got a strong tailwind. In fact, there was a huge storm coming from the north, with the foregoing wind chasing us. We had a rush, competing with the storm. There was great lightning surrounding us. The heavy wind blew the sand so strong that it created local sandstorms disabling to see even the road sometimes. Eventually we had only a small shower, as we reached an industrial zone with a coal powder fired power plant. Of course, we were black and white after the rain, we could collect some coal. 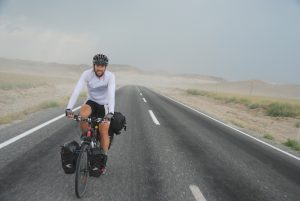 After about 50 kms of steppe-ride we arrived at the first town, Beypazarı. We had one aim here: to fill ourselves with some food, as we were physically quite dead. All right, we entered the supermarket, where I had a glance at the top quality fuel: the baklava!!! If we assume food is a kind of fuel, the baklava must be one with 98 or 100 octane number. We gorged all of them so we could ride again with full power across the steppe. 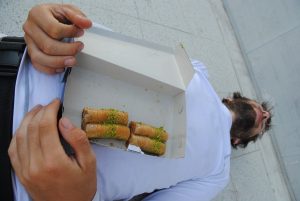 The landscape became naked and more naked. We cycled a few days on the treeless land, mostly in the hottest hours. Occasionally we found some random riffles with water spring, in the middle of the draughty steppe. I didn’t have better idea than jumping in the riffle and cool down a bit. 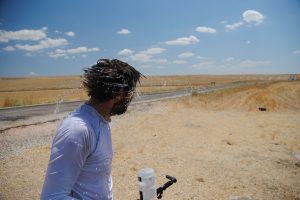 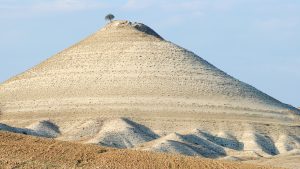 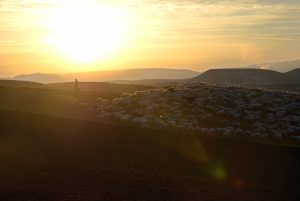 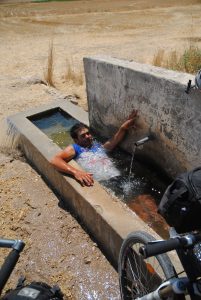 We woke up next to Haymana, the city famous of its hamams (thermal spas). We had only one day more to the great salt lake, the Tuz Gölü. We had nothing to eat for breakfast, so we started cycling and entered the first little village. It seemed abandoned, we found only one man to ask, where is the shop. He shown us the direction so we entered the village center. OOh so this is why the village seems dead! All the people are here at the center. Actually they hosted us as UFOs but nobody was begging for money. In the shop we bought some food and as an extra, a glass of flavoured mineral water. As it was glass, we knew it is returnable, we won’t pollute the environment with its waste. The drink was very delicious. As we finished, we wanted to return it in the shop. Then a boy besides us grabbed the bottle and calmed us down to rest, he’ll manage it. Then he casted the bottles in the ditch nearby. We just twinkled. Whyyyyy??? Then an old man informed us that there is no municipal solid waste collection here. Everything lands in the ditch. And yeah, it was full of rubbish. And actually there is no big problem of it, because of the draught. All the organic dries out and it’s even not stinky. Nice solution. 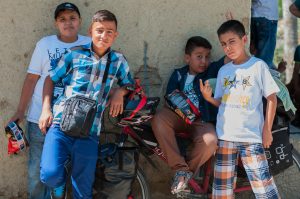 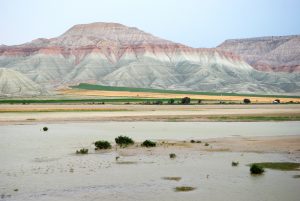