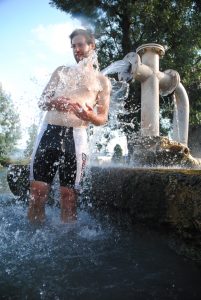 After the capital we hit the road and entered the mountains in the countryside.  In a thermal source we could have our second shower on the trip (it’s advisable to count, it’s not a daily thing in the life of an adventurer). After this little break we introduced ourselves to the mountain roads. They were quite strong, not like us. Thus we got our condition here. We spent an afternoon and a whole day in the mountain range Homoljske Planina. The mountain roads were not famous about their quality, but the view was beautiful most of the time. Slowly we were approaching the border of Bulgaria, exceptionally we had fine weather. Not like in the evening: after dinner we wanted to eat the last 10kms but we came to a halt thanks for the rain. We experienced the beauties of setting up a tent in falling rain second time.

The following day we entered Bulgaria after a short climbing. At the first sight Bulgaria seemed a peaceful, modest and pleasant place. Not that developed, which I really liked. 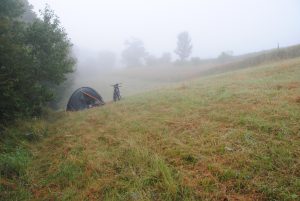 The traditions are quite strange for us. We faced the cultural difference between our home and Bulgaria a very funny way. We saw a herd on the field nearby the road, a shepherd woman looked after it. It was so fabulous view, we had to take a photo. We approached the woman and asked her, if we could take a portrait about her. She nodded. Misi grabbed his camera and started to take photos of her. Our photo subject expressed her displeasure very comprehensively. We looked at each other with Misi. 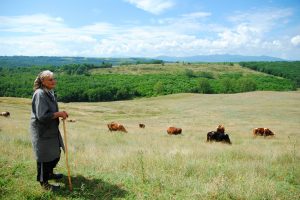 The woman didn’t fret, I think she was aware of our cultural difference. We said goodbye each other and continued the trip. On the road we found out that people don’t need to go to the funfair, to find a roller coaster, because cycling here was the same experience. Each village was in the deepest part of a valley, but the road elevated 200-300 meters every time we exited the settlements. Here came the smaller hills, where we could climb 10-20 meters and descend, and stay on the same level. A few kilometres later a huge descent came and we found ourselves in a village again. These boring roads were tuned up by some random turtles and angry dogs starting to chase us. 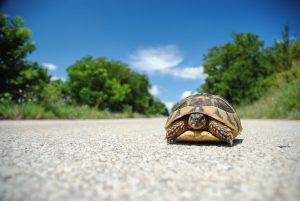 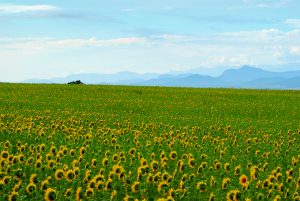 In Botevgrad we happened to buy the stuff for the preparation of a juicy fine cream of wheat with cranberry and cinnamon. As we rode further, Misi warned me about something liquid flowing from my bikebag. The side of the bag was snow white. Got off the bike and had a look at it, what the hell’s that. OOhhh holy shit it’s a leaked milk can. All right then I’m wiping quickly all the wet milky stuff and the whole bag inside. The bottle of dishwasher was quite advantageous now. After the cleaning process finished, I packed all the stuff back in the milky-dishwasher-splashing bag: I exploited all our water but couldn’t flush the bag properly everywhere. We continued cycling. 50, so FIFTY meters further we found a water spring. Okay, this is my form. 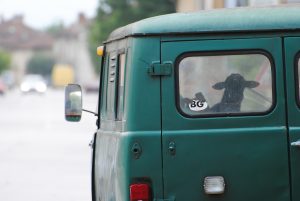 Receding from Botevgrad we crossed small villages. In one of them we found a likeable grocery where we can get another can of milk. Success, fire up the gas stove! While we were cooking, the local cool guys gathered. One of them was very curious and asked me: “How many pushups can you do?” Eventually it turned to a pushup challenge. My friend, Mario Dimitrov won it with 42. They watched us eating our lunch, and then escorted us to the side of the village. While they were riding the bikes, the front wheel sometimes contacted the road. I think they don’t have to change the front tire that often. 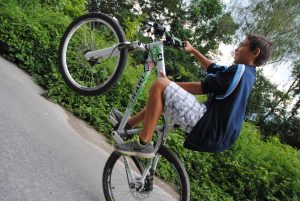 We passed the most hidden miner settlements when we were about to climb over the Zlatitsa Pass, the mountain pass leading us through Staraplanina mountains. It was slightly depressive, the weather was also very murky. We climbed about three hours on the steep slopes of Zlatitsa. Finally, we reached a tunnel, where the muddy-stony road divided: one road kept uphill to the pass, the other one entered the tunnel. We had no idea, where the least could bring us. Thus we stopped and started to eat, maybe somebody presents on the road. Soon we were discussing with a dirt bike rider. He told us that both roads take us to the village Zlatitsa, but the tunnel is full of water, it’s flooded. So he ignited the motorcycle and went towards the pass. Easy for him! We were fed up with climbing. After finishing our meal, we tried our luck in the tunnel, where the conditions were wet, but not that bad. The lighting of the tunnel was absolutely zero, so we could navigate only via the headlights. In the end we could cross it dry, choosing the right part of the road. Exiting the tunnel we were happy and sad coincidentally: the southern slopes of the mountain got a really intensive rain. So we pulled up the rainproof clothes and started to descend. 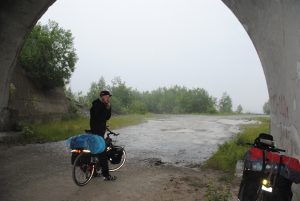 In the first part we were rolling on muddy dirtroads, where little streams licked our tires. Later the road contained some parts of asphalt, and after 3 kilometres it turned to narrow asphalt road. The road was supplied with 10cm-long, road-width rain gutters. Definitely lovely at speeds around 50km/h. We didn’t fall off the bikes, but it shocked the bikes so much, that Misi’s front bags leaved the bike with pleasure. In the lower parts of the road I became the traffic controller: When I found a rain gutter, I started to wave for Misi to let him know, he has to apply the brakes. This way we could avoid the unidentified flying objects leaving the bicycle. In the evening we dropped the bikes near Zlatitsa and laughed at each other, when we checked our look: we were a mass of mud head-to-toe.