Before reaching the border of Serbia, we tried to change money. First we tried at the banks, but none of them could provide us Serbian Dinar. Thus we ended up at a corner lottery ticket seller. Misi changed the money, so I warned him about the smart hands, that the seller might have. Finally Misi got the proper amount of money, and we found out that the change rate was better than at the official change in my hometown. Until we managed our things in Baja – we also borrowed a solar panel from a friend – the weather changed dramatically and we got a real downpour in our neck. 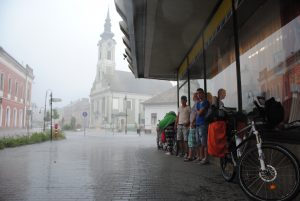 As we crossed the border of Serbia, I optimistically stated, that there will be no more rain. The late afternoon and the evening was so clear and sunny, that I couldn’t even imagine another rainy day. For our first night we found a good place for the tent in the flood basin of river Danube. We just set up the tent and started the campfire, when there was a man stopping his motorbike close to us. He was the local ranger, who told us to go further in the campsite and sleep there. Misi tried to communicate nonverbally and it hit! The ranger understood us and got lost. 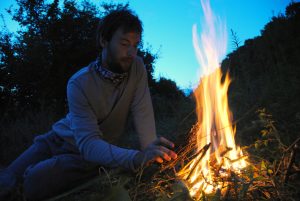 Despite this, the following day after a substantial lunch we found ourselves between dark clouds, and the rain started to fall. Quickly, quickly we pulled up the rain jackets and rain pants, we also assembled the rain covers on the packs. After this intermezzo we cycled further, but didn’t get too far. After about 50 meters we were forced to stop by the rain. The length of visibility was about 2 meters. It didn’t take away Misi’s breath:

He forced pushing the pedals further – about 10 meters more. The rain changed phase and ice particles started to fall. It didn’t matter if we had a raincoat, the icy rain flowed under it at the neck. This is how we had our first shower on the trip. 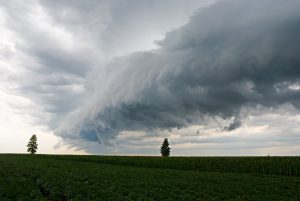 In Serbia we continued our trip on the Eurovelo 6 cycle route. This path was fine, it brought us on low-traffic roads across small villages. It leaded us straight in the middle of Beograd, the present capital of Serbia. Well we, Hungarians call it Nándorfehérvár, a few centuries before it had an enormous defensive importance against the ottoman empire. There was a great battle here in 1456, when Hungary and the helping fellows could defend this stronghold. Well we had a plan. We wanted to have a look at the castle, and also stay in the city for the night. However, we didn’t have an accommodation. We tried to get a place at the parsonage of some churches – without any success. Finally we entered the fortress and had a look around. We met a security guard so I asked him:

We immediately started to look for the potential bivouac places. We found a perfect place, where they can’t spot us. That’s awesome, we’ll camp in the stronghold!!! Unfortunately the rain started to fall, which meant, we have to give up bivouacking and look for a place to set up the tent. No, we can’t do it in the castle.

We wandered a lot between those legendary walls, where Hunyadi and Kapisztrán earned triumph over the ottoman empire’s army. We found a marble board, which informed us, that the battle took place here in the same period of the year, as we were there. It was hard to imagine that blood flowed here a few centuries before.

Now the rain flowed so we exited the stronghold and slipped down under the walls. At the feet of the walls we found a little ruin, which was the perfect place for our camp. During the night nobody disturbed us, but the disco nearby was very loud. 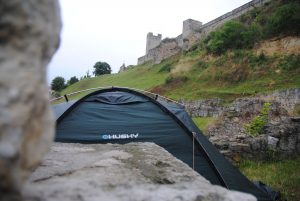 In the morning we climbed out of the tent. First thing I saw was a man walking on the top of the walls.

Misi also saw him, but he realized that it’s a security guard. OOOOooops! Okay, we’d better fire away as soon as possible.