I go back in time a few years, because it was quite hard to persuade myself 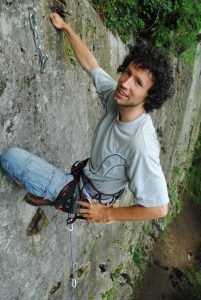 about writing a blog, I succeeded only now. Should have sooner, but ain’t no problem, as I have all the important diary

In the beginning of august 2013 we arrived home from our awesome bike trip we made in the Alps. We divided in the Keleti railway station, and went on separate ways. That evening I was invited by my friend, Peti for his barbecue party. Our mountain guide friend, Barna was also there. He guided us in the Mont Blanc Massive in the beginning of summer, when we climbed some peaks. This bike trip topic popped up after a few can of beer, and Barna made me curious. He told me, that this bicycle travelling is just alright but if you combine it with climbing… that’s the nirvana. He also advised a book, which is about several Alps-crossing bike expeditions in the 1920s.

The party was fine, by the end of the summer I got the book as well, thus my thoughts started to get definite. In the beginning of the autumn semester me and my friends sat down to watch the pictures from the summer bike trip. My friends said nothing but “we must do something like this”, they were so amazed. Well, I didn’t hesitate to inform them about the battle plan:

-Next summer let’s ride all the way long to the Mount Ararat and climb it.

They didn’t scare hearing the estimated data. I told them, it could be a bit more than 3000 km, and can be made in 6 weeks. Misi was the one who thought about it seriously. My friend Misi Bankó, who graduates just the very next summer, he judged this summer trip a proper deduction after university. We were planning the whole year, but in wintertime my thoughts were concentrating so strong on the trip, that I would have jump into this trip with the most pleasure. In springtime I couldn’t think about anything else. From April I counted the days left till the trip. Fortunately the university cared about making me forget the grand journey, because I was suffering a bit from it. 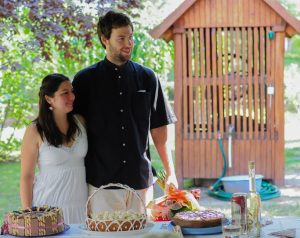 The semester ended, Misi graduated, and finally engaged his girlfriend. 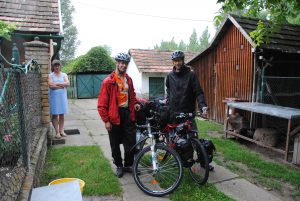 Then two days later we realized that we’re standing in Misi’s garden with the two over-weighed bikes. We were so excited.

Saying goodbye was quite easy, but not the acceptance of the starting rainfall. We didn’t know, how much rain we’ll get during the trip, I almost shut out the probability of more-day long raining on the Balkan area or in Turkey. Cycling was really great. The feeling that we put our wheels on the asphalt route which ends in the easternmost part of Asia Minor. The fact that we started our trip, absolutely shocked me. It was rock ‘n’ roll. 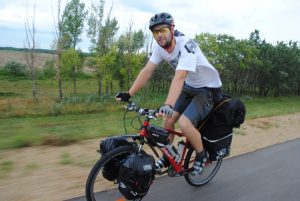 2 thoughts on “The beginning – preparing for Ararat expedition”